In a brand new international benchmark study, conducted by Copenagen Capacity that analyses the best perfoming cities within a range of lighting criterias, Greater Copenhagen takes a prominent 3rd position.

The overall aim of the analyses was to locate cities around the world that make sense for our partner group to conduct field & study trips to, as part of the project’s work. The initial search resulted in 351 cities across 81 countries, whereafter CopCap applied additional criterias, such as memberships in relevant organisations, certain categories for ongoing or planned projects, availability of research insitutions.

This resulted in a reduction to our final 27 cities, spread across 15 countries and 4 continents. Please read the report for further details about the methodology used in this analyses.

We took the opportunity to put some questions to Jacob Christensen, the author of the report.

LM: Greater Copenhagen performs well in the report, why is that?
“It’s partly because of Copenhagen’s ambitous goals for CO2 neutrality by 2025, and partly because the region hosts a growing number of organisations dedicated to development and research of biological lighting – as well as receiving a lot of exposure in media.”

LM: What impression did you get from the lighting industry, as a whole, when doing the research?
” There seem to be many actors with big ideas and ambitions, but with few having yet realised them. This could be because some of the products on the market so far have been too expensive. It also seems to be a very diverse business, where it is particularly clear that we can expect to see a great growth potential over the coming years in the category Biological Lighting.”

LM: Did any findings surprise you?
“I was surprised to see Copenhagen among the top performers in this analyses. But with the world’s most ambitious CO2-neutrality goal, and the recent replacement of the city’s lighting fixtures to LED with built-in capacity for added smart technology, it’s all beginning to add up to Copenhagen’s deservedly high position.”

I was also surprised to see Hamburg pushing its way up on a list normallly preserved a small group of cities like Singapore, Barcelona and Eindhoven.

LM: What could Greater Copenhagen focus on in the future to score even higher across the categories?
“As I understand it, Greater Copenhagen is well aware of its strengths and weaknesses. The whole region also stands taller when united, behind the vision to become a world- leading living lab for smart lighting solutions. But we won’t reach it without competition, Eindhoven has also set incredibly ambitous goals for 2030.”

Read the benchmark analyses report here (in Danish only). 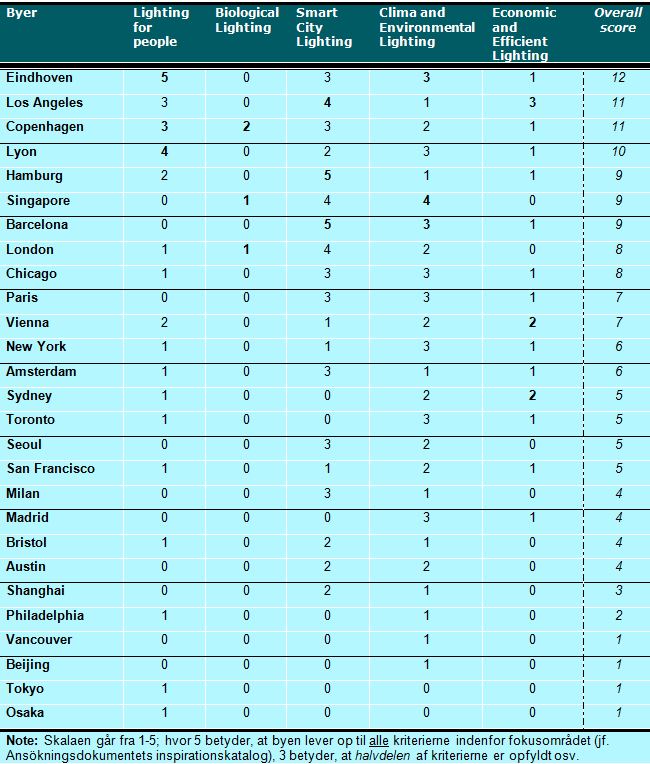